The city's new bridge, which opened in August last year, was named Project of the Year: Engineering, Construction and Infrastructure, at the Association for Project Management (APM) awards in London. 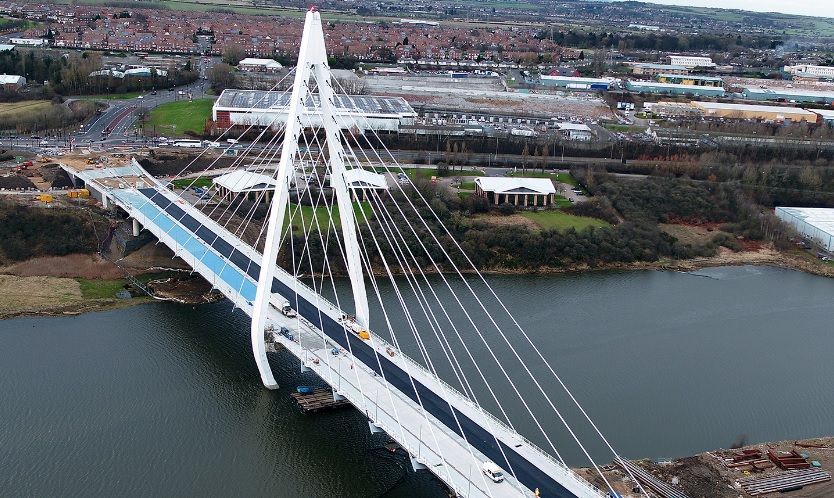 We are delighted to have supplied and installed our marketing leading spray applied bridge deck waterproofing system, PmB to this local landmark bridge development in Sunderland, UK.

The bridge has been constructed to the west side of the city over the River Wear, with the purpose of reducing traffic congestion. It was designed by Spence Associates in partnership with structural engineering firm Techniker. The bridge was first designed in 2005, but it was kept confidential for several years by the City Council to avoid a rise in expectations until funding was secured. The council was also considering plans for a cheaper, basic beam bridge design. The cost of the Spence design was estimated at £133 million for the bridge and the associated approaches and roadworks.

The crossing forms part of the regeneration plan produced by Sunderland Arc, whose aim was to use the bridge as part of a Sunderland Strategic Transport Corridor to improve transport links and to improve the city's image. In 2017, following a public consultation and vote, the crossing was named the Northern Spire Bridge.

PmB forms a flexible, chemically resistant seamless membrane tough enough to outlast the design of many structures. PmB has exceptional bond strength to all commonly used substrates, has excellent crack bridging capability, a life expectancy in excess of 30 years and holds British Board of Agrément approval. Tested and approved throughout the world to the highest standards, the PmB system now adds Network Rail and London Underground (LUL) approvals to its ever growing list of accreditations.

Northern Spire was up against a number of outstanding engineering and infrastructure projects from across the UK, including the Royal Navy's new HMS Queen Elizabeth aircraft carrier, medical research centre The Francis Crick Institute, Master Gas System Expansion Phase-1, by Saudi Aramco, and The Temperate House Project. However, the project team for Sunderland's new bridge was awarded the top accolade before an audience of some of the country's leading project managers and infrastructure specialists.

The APM award is the latest honour to be bestowed on Sunderland's new 105m-tall cable-stayed bridge, which links Castletown on the north side of the River Wear with Pallion in the south and took more than 2,000 people to build.

"What a wonderful honour, to be awarded Project of the Year by the Association for Project Management, for our beautiful Northern Spire bridge, especially given the extremely high standard of the other projects nominated," said Sunderland City Council Leader, Cllr Graeme Miller.